Ken Biggs is a trombonist in the Portland area.

David Bryan brings over thirty years of wide-ranging performing experience as a professional trombonist. He is a member of the orchestras for both Portland Opera and Oregon Ballet Theater, and has performed and recorded with the Oregon Symphony. He has also performed with symphony orchestras in Honolulu, Seattle and Eugene, and is the principal trombonist of the Oregon Coast Music Festival.David has backed up many international artists in their northwest appearances, from Natalie Cole to Luciano Pavarotti, and has played in the pit orchestras for touring musicals featuring artists such as Jerry Lewis and Marie Osmond. His work as a lead trombonist in local groups such as the Woody Hite Band, the Carlton Jackson/Dave Mills Band and the Portland Jazz Orchestra is well known and regarded in Portland’s musical community. David played lead/solo trombone on many of Norman Leyden’s popular big band specials. He also enjoys long-standing membership and musical friendships in the Columbia Brass, Oregon Renaissance Band, and Pioneer Brass.  David received a Bachelor of Music degree from Linfield College in 1985. He conducts the Big Horn Brass,  the Northwest Horn Orchestra, and was the initial conductor for Rose City Trombones.

Larry Coates earned his bachelor’s degree in music and music education credential from California State University, Sacramento, where he studied trombone with Joseph Alessi, George Roberts, Mark Lawrence, Lester Lehr, and Ernie Hills.  He earned his masters in conducting from Sam Houston University.  While in Sacramento, Larry performed with the Camellia Symphony Orchestra, the California Winds, and freelanced.  He moved to Portland in 1999. During his time in Oregon, he has played with the Oregon Symphonic Band, the Pacific Crest Wind Symphony, freelanced, and has been a soloist for the Oregon Pro Arte Chamber Orchestra.  Larry has been awarded the Blazer “All-Star” teacher in 2002, the Beaverton “Outstanding Performing Arts Instructor” in 2006, and has been on the board of the Oregon Music Education Association 2005-2014.

﻿﻿Jason Elliott ﻿earned his bachelor’s degree in trombone performance from the University of California at Santa Barbara where he studied with Bill Booth of the Los Angeles Opera and Hollywood Bowl Orchestra. Previous teachers include Larry Zalkind, Andy Malloy, Dr. Bruce Tychinski, Sean Reusch, Toby Oft and Phil Keen. Jason is currently 2nd trombone with the Willamette Falls Symphony and enjoys an active freelance schedule in the classical, jazz and indie music arenas as well as teaching privately in his studio and publicly for schools in the Portland Public School District. In addition to the Willamette Falls Symphony, he has performed with many local Portland brass ensembles, the Mike Curtis Jazz Project, Prankster Big Band, TV Jazz Band and enjoys composing and arranging music for private projects. Prior to moving to Oregon in 2012, Jason enjoyed performing with the Ventura Jazz Orchestra, bass trombone with the West Coast Symphony (Santa Barbara Fiesta Festival Orchestra), general freelance work across Southern California while in school and 2nd trombone with the San Diego Civic Youth Orchestra prior to college. ﻿

​Sam Louke is bass and tenor trombonist.  He performs around Portland with the Oregon Symphonic Band, Second Wind Jazz Band, Tillikum Symphony, The One More Time Around Again Marching Band, and Billy's Brass Band.  He is also Chairman of the Board for Oregon Symphonic Band.

​Brad McMillan  attended Clackamas Community College and studied trombone with Leroy Anderson. From there he transferred to Portland State University where he earned a BS EE. He works for Biotronik developing pacemakers. While at PSU he played with the Portland Youth Symphony, along with David Bryan, another member of Rosé City Trombones. He was a founding member of the Bull Mountain Brass Quintet. He is currently playing with the Kathy James Sextet. He has managed to promote trombone playing at home by raising three children; two have adopted the trombone as their instrument of choice, the third plays the trombone part time along with flute and piccolo - the wife still refuses.

Megan McMillan  studied Trombone at the University of Oregon under Henry Henniger.  She has her degree in Computer and Information Science, and a minor in Music. During her time at UO she participated in the studio's Trombone Choir, Track Town Trombones (where she was first met  Rose City Trombones). She participated in musical groups including the University Wind Ensemble and University Singers, and was the Lead Trombone in the Green Garter Band. After she graduating, she performed with the Eugene Symphonic Band and co-founded an all-women's brass quintet - Blugene Brass.  She recently moved back home to Portland where she works as a Full Stack Software Engineer at Kiva Microfunds. 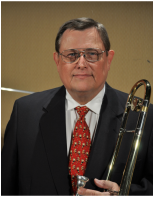 John Northe attended Lewis & Clark College where he earned a Bachelor's and Master's degrees in Music.  His trombone teachers were Louis Philbeam, John Trudeau, Christopher Leuba and LeRoy Anderson.  He taught band for  30 years in the David Douglas School District.  John has played with the Portland Opera Orchestra, The Vancouver Symphony, The Columbia Symphony, The Oregon Symphonic Band, the Pacific Crest Wind Symphony, and the Portland Festival Orchestra.  He has played over 30 Professional Broadway Touring Co. Productions from 1976 [A Chorus Line] to 2011 [Lion King and Mary Poppins revival].  John has been a sideman for Norman Leyden, Mel Tormé, Tony Bennett, Natalie Cole, Rosemary Clooney, Bob Hope, The Temptations, Frankie Valli, Mary Wilson, and the Three Irish Tenors.  He played 24 years for the Ringling Bros. Circus, during their Portland shows and many years with the Ice Capades. Also 8 years with various bands on the Queen of the West Riverboat.  John is currently waiting for his "big break." 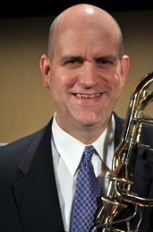 John Ohnstad is a co-founder of Rose City Trombones and is the Bass Trombonist with the Portland Columbia Symphony Orchestra, the Art Abrams Swing Machine Big Band and Big Horn Brass. John has performed with Trombone 8, The Carlton-Jackson Dave Mills Big Band, The Oregon Symphonic Band, the Portland Youth Philharmonic, the Oregon Symphony and the Tucson Symphony.While attending the University of Arizona, John performed in all instrumental groups, musical performances, and opera productions. After graduating with a degree in Marketing and a Minor in Music Performance, John won an audition to perform in the Walt-Disney World All-American Orchestra's production of "Celebrate Broadway." John has recorded 3 albums with the Art Abrams Swing Machine Big Band and is a featured soloist on the latest album, "Speak Low, Swing Hard."  John's teachers include: Richard Ballou, Rick Tippets, Marc Wolters, Gary Nelson, Tom Ervin, Richard Obregon, Jeffrey Reynolds, and George Roberts.  John has and continues to enjoy a fun and exciting career in sales with General Transportation Services of Portland, OR. When not playing his Bass Trombone, John can be found with his lovely wife, 2 boys and riding his really, really big bike. 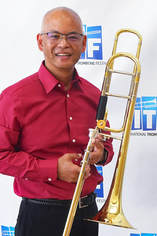 Todd Ouchida is a native Oregonian and self-proclaimed tenor trombonist. He started playing trombone
in the 7th grade and studied with David Bryan.  Todd attended Oregon State University to study Engineering. While at OSU (Go Beavs!) Todd played in all of the bands, ensembles, and orchestras that did not require getting his feet muddy; he received the Maurie Clark Foundation Music Scholarship each year.  Todd has enjoyed a fulfilling 30 year career with Intel.   He plays trombone with RCT, the Minidoka Swing Band and Portland Christian Center Orchestra.  He lives in rural Washington County with his lovely wife, half of his six children and an assortment of animals. 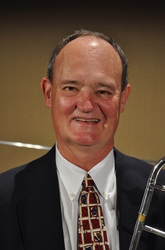 Dave Parker is emeritus director of the jazz programs at University of Portland.  He is retired as a high school band director of 35 years.  He writes music for a wide variety of clients, plays trombone professionally in the Portland area, and is active as an adjudicator and clinician for many different music events throughout the West.  Dave possesses an MME from University of Northern Colorado.  His music publishing business is Olliecreations.com.

Josh Prewett received his Bachelor of Music Education from the University of Northern Colorado.  He taught band at Timberview Middle School in Colorado Springs, CO where his Symphonic Band and Jazz Band both performed at the Colorado Music Educators Association annual conference.  Josh performed with he Castle Rock Trombone Quartet, Pikes Peak Brass Band, Academy Jazz Ensemble, Rocky Mountain Wind Symphony, John Saunders Band, and Bad Grammar Overload.  Josh currently resides in Salem, OR​ where he is a Northwest District Manager for Yamaha Corporation of America.  In his spare time, he enjoys building Lego with his kids, collecting Star Wars memorabilia, and writing and arranging music.

Jerry Stalnaker is a shy, secretive, and nearly mythical bass trombonist.  He refuses to write bios.   Is difficult to photograph in a natural setting.  Graduated Portland State University with a BS Music performance.  Performed on Esperanza Spalding' Grammy-winning City of Roses recording.  Jerry teaches in Portland Public Schools and also plays with the Oregon Symphonic Band and Portland Wind Ensemble.

​Andy Taylor is a co-founder of Rose City Trombones and a bass trombonist.  After an exciting few years at the Eastman School of Music (including the ESM Trombone Choir), Andy detoured to pursue a more reputable career in computer science winding up at Intel.  When his daughter started playing cello, he rejoined the performance world.  Andy has studied with John Marcellus (ESM), Mark Lusk (Penn State), Joe Stanko and Perry Martin.  He has been mind-numbingly fortunate to perform with Vanessa Williams, Joe Morello, Frank Foster and under the direction of Aaron Copland.  A jack of many trades, Andy records and produces our videos, maintains our web and facebook pages, arranges bookings, and does much of our marketing.   You can also find him in the tbone sections of the Salem Orchestra, Big New Band, Portlandia Brass Ensemble.  Andy teaches privately in his studio and specializes in adults returning to the instrument.  He free-lances around town on bass and tenor trombone.

Andrew Thompson grew up in Beaverton, earned a BM in Music Ed & Performance from the University of Arizona, and MM in Jazz Studies from DePaul University. He was a finalist for the Intrntl Trombone Assn  2006 Frank Wiehe solo competition. Andrew has played for the US tour of "I Can't Stop Loving You" (a musical revue),  the Tucson Symphony Orchestra, Carnival Cruise Lines, the 2004 Disney Collegiate All-Star Band. He can be heard on recordings with Shout Section Big Band, the Josh Jern Jazz Orchestra, and Nickelodeon's "The Fairly Odd Parents." He is an arranger/composer and was published in Downbeat Magazine in 2010. He currently teaches music at Aloha High School and enjoys playing with the Blue Wave Band and other groups around the Portland area.

Rick Tippets is a well-versed trombone/flugelhorn player with "enormous" skill. After studying trombone performance at the "legendary" North Texas State in the '70s, Rick earned his teaching degree at Portland State University and embarked on a 31-year career as band director at Lakeridge High School. He is a founding member of the Jacob Merlin Band and has played in many Portland area bands, including the Art Abrams Swing Machine Big Band, since 1987. 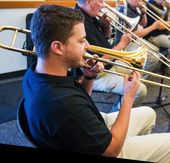 Brandon Tabbal is a freelance trombonist in the Portland area.  Heavily influenced by his favorite trombonists (and former teachers), Andy Martin, John Moak, and Ben Medler, Brandon's playing can be heard in various musical groups around town including jazz, classical, Latin, pop, rock, and funk.  He has played with Trombone 8, Big New Band, Five Guys Named Moe, Bobby Torres, Jumptown Big Band, Lily Wilde & Her Orchestra, Art Abrams Swing Machine, Jack Quinby & His Orchestra, and many more.  Brandon graduated with a bachelors degree in accounting from George Fox University. ​
Shayna Waldman is a bass trombonist in the Portland area.
RCT Alumni are always welcome whenever they are in town (or we are on a road trip).  If they are in your area, hire them quick.
Joseph Jefferson - Jackson, MO            Michael Meier - Boise, ID
Ryan Gabbert - Houston, TX                  Will Gamache - Denver, CO
Todd Schendel - Iowa Cita, IA                Al Torres - On a remote island with a single palm tree, Washington